Please fill out and submit this brief questionnaire so that we can best serve your needs.
If you prefer, you can call us directly at (800) 289-0500. 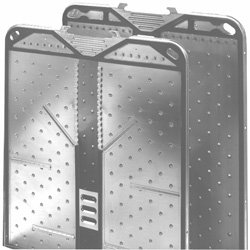 During the plate evaporation process, liquid is pumped between thin plates with the heating medium on the mating surfaces. The product is then evaporated with the vapor generated forming a high velocity core. This expansion in volume causes a high-velocity, thin film on the heat exchange surface providing efficient heat transfer.

Plate evaporators should be considered for applications that have:

There are no questions yet, be the first to ask something for this product.

How can we help you today?

We are dedicated to providing our customers with excellent service and have been for more than 100 years.